Purple Rain, Lemonade, and Brown Sugar: An Ode to An Emotional Week in Music 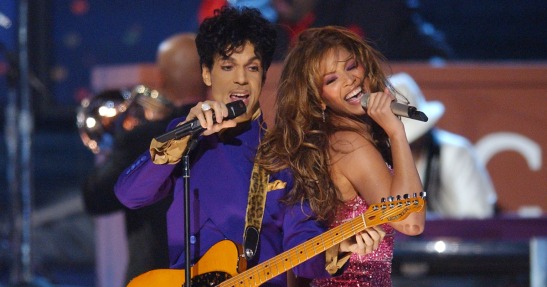 Prince and Beyonce at the 2004 Grammys.  Michael Caulfield Archive

In the past week in music, I’ve gone through more emotional changes than I can count. I’m still drying out the purple rain tears from my pillow because Prince! When that breaking news came through on Thursday, April 21, 2016, I almost passed out. Not The Purple One. Not the one who seemed he’d live forever. Not the one who told us to go crazy and party like it was 1999 a long time ago. Not the one who gave us lyrical genius, wicked instrumentals, and fantastic party anthems laced with provocative, profound, themes about life, God, religion, and love. Not the one who wrote, produced, directed, played, and saaaaang, honey, the soundtrack of my childhood, pubescence, and adulthood. The one who fought for creative freedom for artists with the most delicious swag. The one who gave so much to others without seeking credit but because he couldn’t “be in this world with all this pain and suffering without doing something.” Not Prince. Not now. Too soon. But the beautiful ones, they hurt us every time.

This Is What It Feels Like When Doves Cry

I have cried and cried and sang and cried some more. My kids even called themselves having an intervention: “Mommy, we know you’re sad, but really, do we have to keep hearing these songs over and over?” Yes, kids, yes, you do. Sit down. You gon’ learn today. After I sang, “I only want to see you laughing in the purple rain” a million times, my four-year old proclaimed, “I’m already laughing in the purple rain!!!!!” As if to say, enough already!!!! I get it. They just don’t get it. And that’s ok. But I had to give myself permission to grieve. I went from feeling devastation to feeling guilt. Guilt for mourning for someone I never met. Guilt for taking so much from someone and not knowing that he was in pain. Guilt for feeling like I knew him through his music but really not knowing him at all.  I decided to just let the guilt go and do what felt natural. I guess this is what it feels like when doves cry.

Fast forward to Saturday, April 23, 2016, and, in Queen Bey fashion, #Lemonade drops on HBO. Two days after one of the greatest to ever do it exits stage left. The one who said, “Like books and black lives, albums still matter” at that Grammy Awards show where he gave out the Album of the Year Award and Beyonce was beat out by Beck.   Bey drops her second full-blown visual album with all the mystery that Prince was known for and that has become her recent modus operandus. I mean, could it have been timed any better? Brava, Bey. Brava. Clearly planned well before the untimely and tragic ending of an era, it’s like the universe was lined up for it to happen this way. Because if anyone can help us deal with the loss of a music icon, Bey can. Lemonade brought some sunshine to a very dreary week. And Prince is giving her that Album of the Year award posthumously.

Having no idea what this might be but always intrigued by anything Beyonce, I checked it out late on Saturday night, courtesy of my DVR. So, through the intermittent viewing of my sleepy eyes, my first impression was “Whoa! What the…??? Baseball bats, water, fire, darkness, menses plugged with pages from the Bible, Serena coming through, lives being threatened. What they putting up in this lemonade??!!” Words of caution—don’t watch this while sleeping, drinking, driving, or otherwise distracted. This requires your full attention. Because you might get hurt. Don’t hurt yourself.

So, What Are You Going To Say At My Funeral Now That You’ve Killed Me?

I had to revisit on Sunday morning and with fresh eyes and a clear mind, I experienced the magic of Lemonade. This lemonade is laced with brown liquor and dripping with brown sugar. Queen Bey slayed. And I am here for what she’s doing. Is it about Jay-Z cheating? Maybe. Maybe not. But that doesn’t actually matter. Perhaps the backdrop of Jay’s rumored infidelity is a great attention grabber but I hope that we don’t lose the power behind the messages in an effort to get that good gossip. I felt so much more.

The album takes us through a continuum of emotions that is so critical to the healing that Bey is advocating for. Intuition. Anger. Apathy. Emptiness. Accountability. Reformation. Forgiveness. Resurrection. Hope. Redemption. Bey goes from “tasting the dishonesty” to tearing up the town in a fierce yellow dress with a baseball bat and a smile on her face. She even interjects an adaptation of one of my favorite Prince quotes, “If you play me, you play yourself.” Don’t play with Bey, honey. Death threats to side chicks and divorce threats to disrespectful husbands evolves to images of Bey tenderly cradling the head of the man she loves in her hands because “promises don’t always end up that way.” 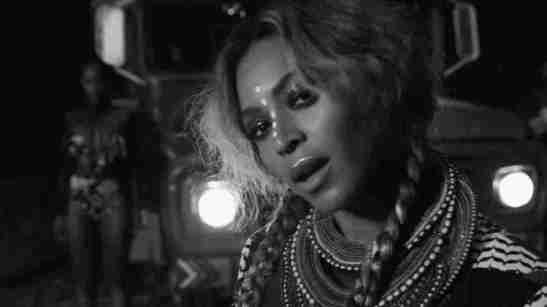 This continuum of emotions is so powerful on many levels. A wicked, fantastic lyrical ride. The awesomeness of what it means to be a woman, to be human, to be alive. But the power is in the completion. Because how many of us get stuck at anger and never move forward, leaving wounds open and raw. The beginning of the album is filled with so much anger and bravado but the end game is, to make love work—in fact, to make life work—you have to give, you have to compromise, you have to submit. Not by settling, not by compromising yourself and your value, but by letting anger go, forgiving, and truly knowing how to love. You have to take lemons and make lemonade. And that is not weak. It is strong. It is how happiness happens and Bey is giving legions of women, black women, in particular, permission to release anger, forgive, live, love, and still be strong while doing it. In fact, it takes more strength to submit than to be angry. Yasss, Bey, yasss!

I love this unapologetic Beyonce. I have to admit, I did clutch my pearls a few times.   I’ve been a fan since Destiny’s Child (though not a stan ‘cause I will give critique where critique is due). This is a long way from Bootylicious (while still being quite Bootylicious; did you see Serena? Werk!). But my tender sensibilities aside, Lemonade is truly a masterpiece. We’ve got the eternal bad ass essence of Maya Angelou, Nikki Giovanni, Toni Morrison coming through via the words of poet Warsan Shire and the Queen Bey herself.

We’ve got Malcolm X, mothers of slain sons, beautifully brown children of the future, African rhythms, visuals, and religious references. We’ve got Jack White (who I had to get to know ASAP) and The Weekend, James Blake and Kendrick Lamar. Interestingly, we don’t have Jay-Z’s voice.  We’ve got daddies and husbands, boys and men, cycles and salvation. We’ve got all kinds of machisma that is both enticing and terrifying at the same time (because wearing “her” skin, hair, teeth, scalp, and sternum is a little bit scary). We’ve got a manhunt for “Becky with the good hair.” We’ve got money with lots of commas but in the end, it’s only about “you, you, you, and me.”  All tightly packaged in a coherent, stimulating visual and auditory experience–each giving a different effect separately and collectively. 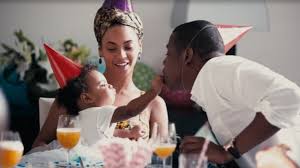 The power of Bey releasing this as a visual album to be experienced from beginning to end is that it doesn’t end there. Sisters walking around trying to collect body parts because they are angry is not the message here (and you know there are sisters walking around daily trying to collect body parts because they are angry). See it through to the end! There is peace and redemption and freedom from anger. There is sisterhood and partnership. There is love. There is tenderness and strength coexisting. I am a hopeless romantic so I want to believe that, if this is the story of the Carters, the ending is truly reflective of where they are today. But I also love that it’s a love story for all of us. We, too, can reconcile with our demons, forgive, love, and find redemption, in whatever way that happens for us.   We can move forward. Because that’s the only option. Brilliant, Bey. Worth every dollar, worth every minute.

You are Terrifying and Strange and Beautiful

When asked about his favorite artists, Prince included Beyonce on the list, stating, “I love everything that she does.” Gritty and hopeful, ugly and beautiful, old and new, sweet and sour, Lemonade serves. The album is not dead. Creative freedom is not dead. Raw, real, meaningful music is not dead. God is not dead. I think The Purple One would be proud.

Alicia R. Adams is an educator by training and by heart, and a happy wife and stay-at-home mom of four girls.  She is the founder and owner of Beautifully Brown Me, a brand and a movement to celebrate and empower beautifully brown women and girls.  She enjoys writing about issues affecting brown women and girls, the extraordinary feats of her little miracles, and a myriad of other distractions from housework.

4 comments on “Purple Rain, Lemonade, and Brown Sugar: An Ode to An Emotional Week in Music”